Mixing it Up: Corporate Perspective 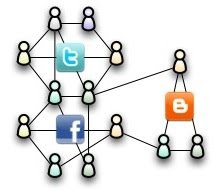 More and more companies are beginning to understand the importance of social networks within their marketing campaigns. I received an email from buy.com this morning with an extensive Twitter campaign. In the case of buy.com's campaign, they focus on existing buy.com customers to extend the invitation and then pull them into Twitter and furthermore require them to become a follower of @buy_com. This enables buy.com to grow within the Twitter network and push new campaigns, as well as have their followers tweet to their own networks.

Now, once they have the followers and retweets, what next? How do they keep their message from being diluted, lost in the shuffle, or from becoming Spam? Companies need to determine the most influential nodes within their network to ensure targeted campaigns that reach as many people as possible but do so in such a manner that the message is not diluted or Spammy, but come directly from a trusted member of the social network.

How do we determine the most influential people within a social network? Well, we can easily define who within our network is connected to the most people. Consider the following image:

While two members of this network have 6 connections, the highest number of friends within this example, they are probably not the most influential. The person in the middle of the graph with only three connections is the sole link between the two subgroupings. This does not necessarily make them the most influential, but is meant to illustrate the concept that more connections does not mean more influence. Even with this determination, many more factors need to be taken into account.

Posted by Nicholas Tunney at 9:36 PM