I started the delete functionality of my application today, for which I am using ColdFusion ORM, and I noticed puzzling behavior when deleting a parent object.  This example will use the following database design: 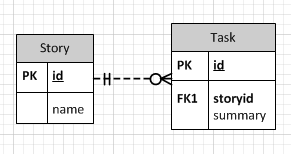 The relationship between a Story and its Tasks is one to many.  Task.storyid is a foreign key that cannot be NULL, as a Task cannot exist without its associated parent Story.  The ColdFusion classes would look like this:

Story.cfc
Task.cfc
Story.cfc defines the one-to-many relationship to it's children on line 6 by defining the relationship type, specifying the cfc that defines the child object, and by providing the foreign key column.  The other important bit here is the cascade attribute.  All cascade options may be found here.  (Note: I also tried 'delete' for the cascade attribute, but it had the same effect.)

When we perform an entityDelete() on the parent Story, I expected the child to delete.  Instead, I received the following error:

By looking at the hibernate logging I could see that the following was attempting to occur:
This order of events doesn't make sense, since in a one-to-many relationship as we defined above, storyid could never be NULL as it would break our model (Tasks only exist within the context of a Story).

To get the delete to cascade properly, I had to remove the required attribute of the FK column constraint. Why is this bad?  Well, without the requiring a NOT NULL storyid in the Task table, we allow a developer to persist an orphaned Task (one that never belongs to a Story).  While application code should prevent this from happening, the database should also enforce this policy by defining a proper schema.

The question is do the ends justify the means?  It was easy to get the cascade to function properly by breaking the database design, but now the schema does not properly enforce model constraints (in the real project I actually had 9 FK constraints across 7 tables).  The alternative is to create a delete() method in the Story object which deletes the Task before deleting the Story.  I don't like that since it does not override entityDelete() and goes around ORM as it should be implemented.  Thoughts?
Posted by Nicholas Tunney at 10:04 AM